President Muhammadu Buhari’s aide on new media, Bashir Ahmad has debunked an online news report which quoted the president as saying he was unaware of Sanusi Lamido’s dethronement as Emir of Kano.

The former emir of Kano was dethroned on Monday by the state government over allegation of disrespecting constituted authorities in the state.

JUST IN: Nigeria Places Travel Ban On China, US, Italy, Iran, Others

The news of Sanusi’s dethronement sparked social media reactions and taken over the news sphere in the country on Monday.

The presidential aide, speaking via his Twitter handle on Tuesday, debunked the report saying, “Please disregard this screenshot — “Am not aware that Sanusi is removed, who removed him? – Buhari asked”. — it is 100% the usual FAKE NEWS.”

Nigeria, US To Sign Agreement To Repatriate $321m Looted Funds 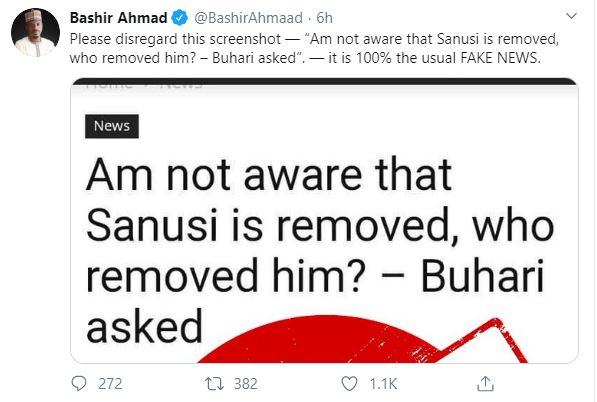 Related ItemsBuhari
← Previous Story I Will Never Change My Principles, Says Dino Melaye
Next Story → BEWARE OF THEM!! Some Ministers Of God Are Criminals: Mike Bamiloye