Tonto Dikeh Fires Back At Churchill, Calls Him A 40 Seconds Cow (Photo)

Controversial actress, Tonto Dikeh has been trending on social media in the last couple of hours after she stated that most men are bisexual.

The statement prompted a response from her estranged husband, Olakunle Churchill who mocked the actress in return.

Firing back at the ex-husband, the screen diva described him as a ’40seconds cow’ who was just a word in the chapter of her life.

MAD O!! What Happened When My Father Saw Tattoos On My Body – Davido Opens Up

She then confirmed that the earlier statement was directed at him by stating that he is also bisexual. 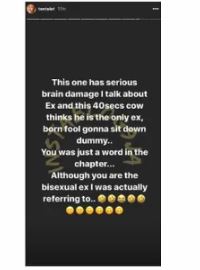