Home / Entertainment / There Would Be No Marriage Break Up In Nollywood If Actresses Were Loyal Like Chioma Is To Davido, Says Maduagwu

There Would Be No Marriage Break Up In Nollywood If Actresses Were Loyal Like Chioma Is To Davido, Says Maduagwu

Controversial Nollywood actor, Uche Maduagwu has opined that there would not be marriage break up in Nollywood if actresses were loyal to their husbands as Chioma is loyal to singer Davido.

According to the actor who spoke in an Instagram post on Thursday, he added that 94% of marriage breakups in Nollywood is caused by disloyalty on the part of the actresses.

“94% of marriage breakups in Nollywood is caused by disloyalty from popular actresses… 💎💎I dont want to mention any name because most of the actresses involved are not just colleagues but also close #friends, 🎬but sometimes the truth is bitter. If you take a closer look at all the recent #marriage breakup in our industry, you will notice a pattern, disloyalty, 👿some actresses actually allow their #celebrity status restrain their duty of total loyalty to their #husbands, and before you know it, one thing leads to another. 🤷‍♂️I am not saying this because my prayers brought Chioma and @davidoofficial together, but if popular actresses in #Nollywood were loyal to their ex-husbands like Chioma is to #Davido right now, there would be no breakups.” 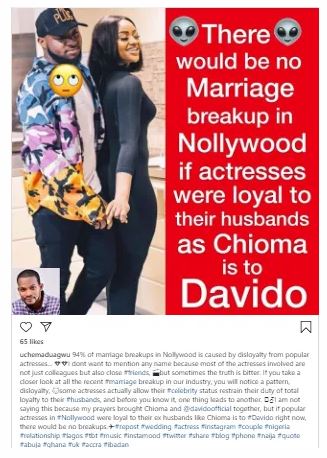 Related ItemsChiomaDavido
← Previous Story “When I Am Done With My Face Surgery, Guys Go Hear Am” – Bobrisky Tells Fans
Next Story → How I Turned Tunde Ednut From Hunter To Hunted – Speed Darlington Boasts