A Nigerian journalist, Taiwo Alabi has warned the general public about an Israeli man who has been living in Nigeria for the past 20 years doing nothing but scam.

Taiwo Alabi who hared a picture of the man narrated that they first met in detention in Osun State where the man revealed that is occupation in Nigeria is scamming people.

“I first met this man right here, an Israelite in Osun State CID detention where was detained for 2 weeks after I was arrested during a riot I was covering in Iwo, Osun State in September 2018.

In the cell, we got close with others and he made it clear to us that he’s been doing the scamming business for all his life and he has spent more than 20 years here in Nigeria while his family resides in Israel.

Yesterday, I saw him at Ogba Aguda when he entered a shop to buy stuffs, I approached him and introduced myself as a former inmate (laugh) and I saw that he could remember but denied not knowing me. He rushed into his car and order the driver to speed off.

Why am I saying these? I just want people to be careful around him and should not do or run business with him. He’s a full time scammer.

It also shows how ineffective our system isn’t working here, he wasn’t taking to court after he confessed to being a fraudster (well he will says he’s a businessman), he wasn’t deported back to his country.

He was allowed to call his partners when he was raising the money for his bail. Sad!” 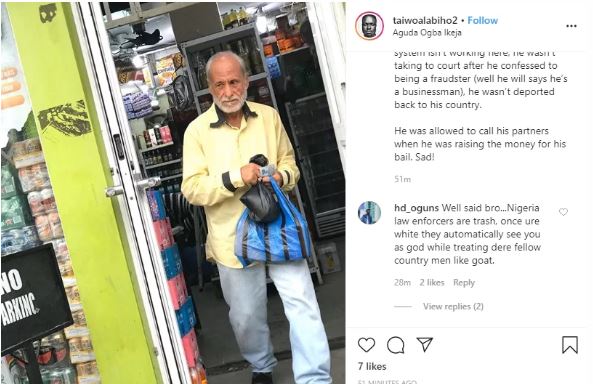