A Nigerian lady identified as @prettyfuro on Twitter has shared that she once stopped picking a man’s call after he told her over the phone that he was on his way to withdraw his last 2k from his account.

Do You Agree?? Hardwork Doesn’t Pay, It Kills – Omokri

According to the lady, she only recently met the man whom she described as ‘good looking.’

Also, they were in the talking stage when the man honestly told her about going to the ATM machine to withdraw his last 2k.

I Divorced My Husband So He Could Marry His Sidechick: Nigerian Woman

She then revealed that she stopped picking his calls afterwards and would only reply to his Whatsapp messages occasionally. 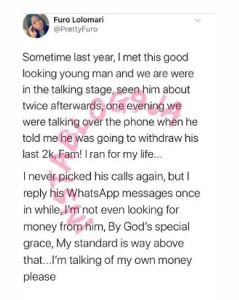 Related ItemsNigerian Woman
← Previous Story Do You Agree?? Witchcraft Is Grossly Overrated In Africa – Daddy Freeze
Next Story → ‘My Mom Is Alive But Dead To Me’ – James Brown (Video)